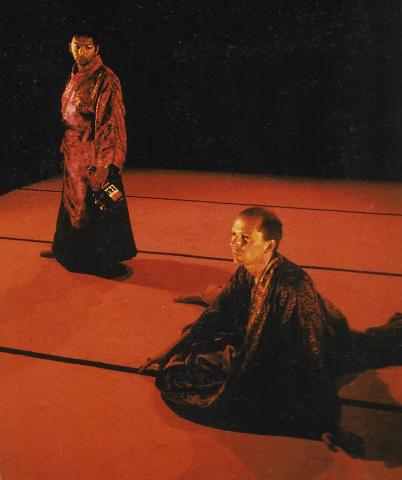 To many people the thought of Shakespeare brings back grim memories of boring GCSE English lessons. But things are changing. The recent Romeo and Juliet film has done much to establish Will as more than just the domain of lovey dovey thespians and English lecturers. The Border Crossings' production of one of the Bard's most popular plays also throws all the old traditions out the window. This cross-dressing, gender bending, multi-racial production gives a new perspective on Shakespeare's comedy of identity, disguise and love, and gives it a much needed kick up the arse.

Performed on a completely stark set, it was entirely left to the actors to bring life to the play. Music often accompanied them, and there were some brilliant touches such as the soft sound of the waves. It was superbly acted by all the cast, most notably Gareth Corke who plays Viola, who is disguised as a man, and also her twin brother Sebastian. The star of the show, though, was Feste the Fool, played to perfection by Nitin Chandra Ganatra. Wearing a skin-tight pink lace dress and more eyeliner than the Manics ever did, he camped it up in style with predictably humorous results.