REVIEW FROM THE STAGE 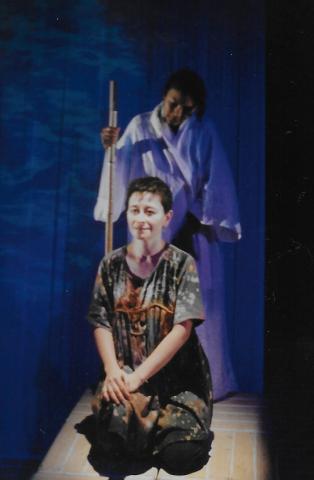 MAPPA MUNDI invites us into the creative consciousness of a great medieval cartographer in an attempt to penetrate the secrets of his enigmatic masterpiece.  In startling juxtaposition of the medieval and the modern, the play explores some key moments of 20th century political and ethnic turmoil in terms of the vision and imagery of the 14th century masterpiece.

On a bare stage, a shimmering pavilion of silk, a brilliant sequence of video images and a rainbow palette of music from medieval plainchant to contemporary urban rap dissolve time and place, only to reissue them transformed by the alchemy of light and sound.  Add to this the immensely assured acting and dancing of a multi-ethnic cast of six and the effect is mesmeric thanks to Nisha Dassyne, Mauricio Elorriaga, Lifati Harimedi, Anjali Jay, Veronica Needa and Ben Pitts.

One of the evident sources of strength in this wholly compelling production is that the cast are creators, not merely performers. Mauricio Elorriaga, for instance, moves with lyrical conviction on the set that he designed, while Dassyne's costumes are a visual feast. The whole enterprise has such rich ethnic authority that the cross-cultural movement is effortless.  Much of the production's driving momentum and coherence stems from Michael Walling's tightly controlled direction. The tempo is never manic nor the tone hectoring. And some moments of warm humour allow MAPPA to breathe. An exhilarating evening.