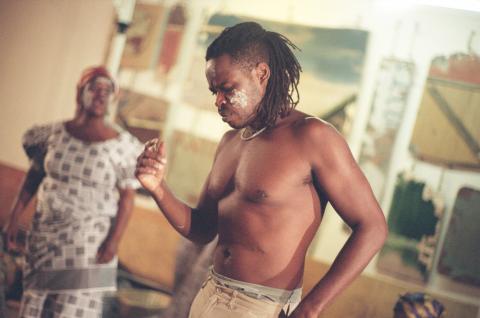 Theatre and the Nation are inextricably linked in Ghana. Since the establishment of independence, the country's political and cultural leaders have engaged themselves with the fundamental question of identity post-colonization. It is this search for identity that has given voice and focus to the unique National Theatre Company and developed the style of Abibgromma.

At 12 am, on March 6th, 1957 the newly named Nation of Ghana came into being. The name came from an ancient empire that existed in the 4th - 13th centuries five hundred miles north of present day Ghana between the rivers Senegal and Niger. By adopting the name of a strong, pre-colonial empire, Kwame Nkrumah, Ghana’s first President, was consciously redefining and galvanising the identity of a new nation. As Edward Said writes in his Culture and Imperialism ‘constructions have been made…by insurgent ‘natives’ about their precolonial past…to create images of what they believe themselves to have been prior to …colonization.’ In other words, in order to create a strong new sense of self for the future of the Nation, Nkrumah knew the importance of constructing a strong image of Ghana’s historical identity.

Nkrumah also recognised the importance of culture and a cultural voice in helping to define and investigate the new ideas of Nationhood he wanted to promote. And it is no coincidence that in the same year that Ghana became a nation the foremost practitioners of theatre, inspired by a new wave of energy and freedom, came together to form the National Theatre Movement to ‘help forge the new nation’s cultural identity’ and create a theatrical form of ‘truly Ghanaian flavour, drawing on oral traditions of performance’.

Prior to Independence, theatre in Ghana had been classically colonial. The British imposed a Western form of theatre, a literary theatre that formed the great paradox for post-independence practitioners; that is to write plays about independent Ghanaian identity, the identity of the self and the Nation, in the language of the old colonial power. With hindsight we are very lucky that they did, as the plays of Efua Sutherland, Ama Ata Aidoo and Joe de Graft are among the most important and insightful investigations into the search for the self written in English.

In 1958, Sutherland founded the Experimental Theatre Players, with funding from the Ghana Arts Council and the Rockefeller Foundation. In 1961 it became officially endorsed and renamed the Ghana Drama Studio, with Joe de Graft, a prominent Ghanaian dramatist (who later starred as Wilby alongside Sidney Poitier and Michael Caine in the 1975 classic The Wilby Conspiracy) as its first director. Here again is an example of how closely linked politics and the arts in Ghana are. It was Nkrumah who, in 1959, had ordered the creation of the National Symphony Orchestra of Ghana, and now, recognising the potential importance of engaging with the people through theatre, actively associated with, and opened, the Ghana Drama Studio.

Sutherland believed in using theatre as a way of contacting and engaging with the greatest number of people possible and in using drama as a tool for social education and change. As a result in 1968 she founded the Kusum Players, a touring theatre company with whom she went on to form and consolidate her Anansegoro, a revolutionary form of theatre which drew on both the Western literary forms and also the Ghanaian flavour of interactive, total theatre, and which was the fore - runner of the style of Abibgromma.

In 1992, on the site of the Ghana Drama Studio, Ghana’s third elected President J. J. Rawlings, after ten years of military rule, ‘created by law’ the National Theatre of Ghana. The building was designed to resemble sails being caught by the wind and propelling the affluence of Ghanaian theatre out into the wider world. However, it was more politically shrewd as a public link between Ghana and China. It was the Chinese who lent Ghana the money and the construction workers for the building, and later cleared the debt, making the iconic home for Ghanaian theatre a gift to the arts of Ghana. In the last few years China repeated the gesture by funding the refurbishment of the building, and then again clearing the debt.

While the National Theatre was being built the Ghana Drama Studio was moved to the University of Ghana at Legon, and was rebuilt as an exact replica of the original Drama Studio. The National Theatre Company was established in August, 1983 as ‘a model repertory troupe to facilitate teaching, research and experimentation.’ Its mission was to ‘evolve the concept of an authentic African Theatre which draws from both traditional and contemporary legacies.’ Abibgromma as a style is a form of Total Theatre, a multidisciplinary form with a uniquely Ghanaian flavour, and a direct line can be drawn between Sutherland’s social and artistic mission to create and define a unique form of Ghanaian theatre with Anansegoro and the Total Theatre of Abibigromma, which is ‘a blend of music, dance, mime, movement and dialogue with a strong social, spiritual and folkloric base’.

Steve Collins was Assistant Director on THE DILEMMA OF A GHOST, and has worked extensively in Africa.