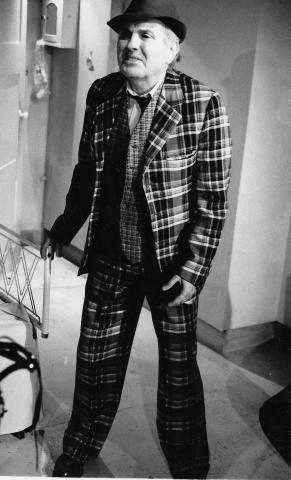 Congratulations all round: to cast member Martin Head and partner on the birth of a baby boy early last Friday morning and to Border Crossings for an electric production of Sam Shepard's taut chamber thriller.  In a seedy motel room on the edge of the Mojave Desert, Eddie arrives to claim May.  She's been let down one too many times by her 'Marlborough Man' and refuses to budge.  Despite their fulminating hatred of each other it seems they are for some reason inextricably linked.  When the innocent, amiable Martin stumbles in on their ritual war it provokes an account of the reason: a chilling mutual tragedy.  In a corner an old man casts shadows from the past....

The rather seedy theatre is a perfect location for this intense production of Sam Shepard's FOOL FOR LOVE, first seen to great acclaim at last year's RSC Fringe Festival.  Under the omnipresent gaze of a mysterious old man, estranged lovers Eddie and May meet in a grubby motel room on the edge of the Mojave Desert where their turbulent history is mercilessly dissected before our eyes.  As revelation follows revelation Shepard shifts fluently from 'fact' to fantasy until you don't know who to believe, before cleverly merging the two into a pleasingly circular plot.

Maria Gough and Miles Harvey play the ill-fated May and Eddie, caught in the trap of a highly explosive and passionate affair that's stronger than both of them. ("we're connected - you know we're connected", he roars at her.)  Gough looks fine as the worn-out May, whose blonde hair has been rendered thin and drab and whose pretty eyes are now haunted by experience, while Harvey's Eddie is a physical tour de force.  With the RSC training much in evidence he creates a highly charged and sensual portrait of a man tortured by fate who's unwilling to go down alone.  If you like macho men who sacrifice morality for lust, watch and melt.

It is to the couple's credit that when one second you are convinced their affair is long dead you can almost feel the sexual tension the next. Making up the quartet as May's oafish boyfirend and the couple's ghostly father figure are David Hounslow and Philip O'Brien, who manage to convey rounded characters that both attract and repel the audience.  Michael Walling's direction is stylised and swift, punctuated by the deafening echoes of slamming doors that accustomise you quickly to the volatility of the central relationship.  And at just over an hour long, the play makes a concentrated and electric start to the evening.  Recommended.