THE DILEMMA OF A GHOST - Full Reviews 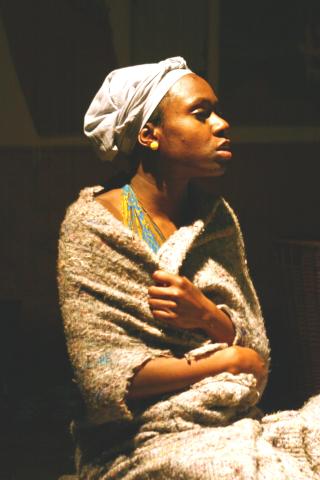 The women cluck, tut and shake their wise heads when Ato, the prodigal son, returns from the US with a new wife in tow. His American bride, Eulalie, is regarded as a "black white woman", hailing from no identifiable tribe, and fails to get pregnant the instant she arrives in Ghana.

Walling's production luxuriates in languid background detail, while the script is so sparse it feels like a morality play, the moral of which doesn't bear inspection. Nevertheless, it's well worth catching this rare outing of one of Ghana's finest writers. 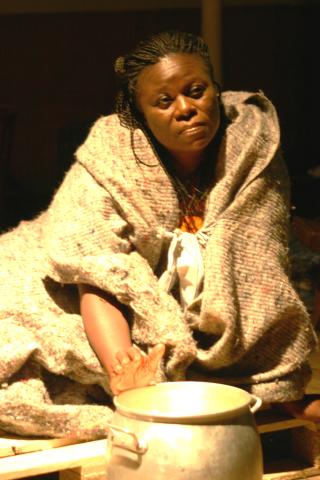 Watching THE DILEMMA OF A GHOST is like seeing your mama and aunties on stage. That is the greatest compliment I could pay to this exquisite play where modern values clash with traditional beliefs. Ato, the first born son of a Ghanaian family, is sent to America to study. When he comes back home, he is welcomed as the prodigal son. It is until he shows his family what he brought back home after years away; not money, not blessings, but an African-American wife whose name, Eulalie, his mother cannot pronounce, that all hell breaks loose. In their naivety, Eulalie and Ato expect to slip easily into the Ghanaian way of life but things do not go according to plan and drama soon ensues.

The rough and derelict reception room of the Africa Centre was the perfect backdrop to the story. Michael Walling, artistic director of theatre company, Border Crossings, recreated an atmosphere particular to Ghanaian concert parties, where itinerant comedians set up stage in court yards and tell stories in a vibrant style, mixing music, comedy, dance and magical displays. We - the audience, sat around the stage, eavesdropping on maids mocking Ato and his wife or being directly talked to by Ato's grandmother lamenting about his ungratefulness. We were drawn into the play and even became part of it as members of the family. We were witnesses to Ato and Eulalie’s misfortune and allowed to laugh, dance and sing with them when they were in high spirits. We were all Ghanaians, if only for one night.

Adeline Ama Buabeng in her role as Nana (Ato’s grandmother) proved once again, why she is a seasoned actress, switching seamlessly between her native tongue and English, inspiring fear and respect. While Dzifa Glikpoe was brilliant in her role as the cheeky and overbearing African mother, dropping in on her son to bring food and urging the couple to give her grandchildren. The entire cast gave a superb performance to the production, bringing an authenticity that I have rarely seen onstage in recent times.

THE DILEMMA OF A GHOST was indeed an engaging and refreshing production to watch and proved to be a real African Classic. 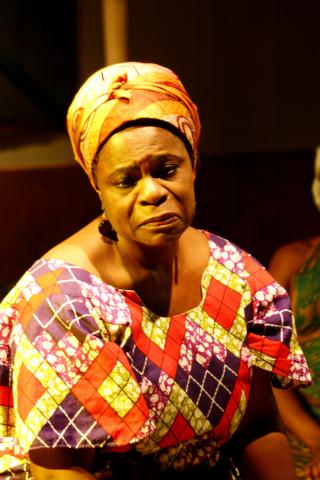 The triangular relationship between mother, son and wife has the potential for hellish stress in any situation. Things are that much worse for Ato, though. The new bride he is bringing home to introduce to his Ghanaian family is not just not from a good tribe, she’s from no tribe at all. She’s from America, where he has been studying. The marvellous scene in which Ato’s mum, aunt, grandmother and sister bewail his marriage to ‘a black-white woman, a stranger and a slave’ shows just how matriarchal this society is, but could easily find parallels in Delhi or Surrey.

Ama Ata Aidoo’s 40 year-old play unravels its tangled themes of tradition, assimilation and gender with clarity but rather too much speed. Shonel Jackson’s Eulalie finds that her fantasy of African life runs quickly into the sand, but her decline into alcoholic rage is implausibly sudden.

Michael Walling’s production (for Border Crossings, in association with the National Theatre of Ghana) gives a powerful sense of village life, both in the chorus of gossipy women and in the wonderful music of Osei Korankye. This is an evening that resonates, but does it reflect contemporary attitudes to the outside world in present-day Ghana? That is less clear.

THE DILEMMA OF A GHOST was indeed an engaging and refreshing production to watch and proved to be a real African Classic. 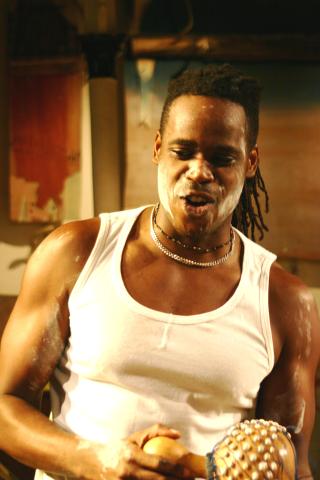 THE DILEMMA OF A GHOST is playing at the Africa Centre, which is quietly tucked away in Covent Garden. The Africa Centre is barely visible between the glimmering lights and back-to-back West End theatres and restaurants of Covent Garden. Once you enter, however, it is difficult to imagine that you are still in London. Long gone are the bustling crowds and jam-packed, buzzing streets. You seem to have arrived at a local Town Hall or Community Centre. A few rows of seats stretch down the hall with a stage area allocated in the middle of the audience. The play is performed without a levitated stage or high-tech sound and lighting, thus taking theatre back to basics. It is obvious that this play is going to be very different from the usual explosive musicals of Covent Garden.

THE DILEMMA OF A GHOST is essentially about a modern-day culture clash. Ato Yawson, a young Ghanaian, returns home from his studies in America with his new bride, the African-American Eulalie. Poor Ato seems to be unaware of how hard it is going to be to integrate the very American Eulalie into his traditional Ghanaian background. The main issue that seems to cause the most disruption is that Eulalie has decided to use birth control – something that the women of Ghana cannot understand. Child bearing is fundamental to the life and status of a woman. Eulalie’s decision to interfere with the natural route of birth forces Ato to lie to his family about why they do not have any children. Eulalie is devastated that Ato tells this lie. As a fully Westernized women, she cannot understand Ato’s loyalty to his tribe of people. This in turn leads to Eulalie’s heavy drinking and in the end, the destruction of their relationship.

THE DILEMMA OF A GHOST is a mesmerizing insight into some traditional African culture. It is acted beautifully and simply. It is covered in drum-based Ghanaian music and singing, classic Ghanaian dress and at times, language. A variety of emotions is spread out through the play, entwining humour, love, sadness and anger. At times, it is hard to follow the exact meaning of certain references but the general gist is obvious. There are, however, undoubtedly layers of themes and symbols at the heart of the play that I know I didn’t quite pick up on that would enrich its meaning.

In commemorating two hundred years since the Act Abolishing the Slave Trade, the legacy of slavery is laced throughout THE DILEMMA OF A GHOST – the ghosts being a manifestation of slavery. Ato’s harrowing dream - that seems to come out of nowhere - of two children that sing the ghost of a slave song, turns into a violent and terrifying scene in which a doubled-over Eulalie takes on the character of a slave who is repeatedly whipped. This part of the play is a powerful reminder of what the slaves endured from their masters; the atmosphere in the room thickened with horror and sadness. The whoosh of the whip that sliced through the air with menace was unsettling and uncomfortable, it went on for longer than I would have liked but brought me and the rest of the audience face-to-face with a past that we can only ever imagine.

THE DILEMMA OF A GHOST wonderfully incorporates culture and entertainment. It tears you away from your Western life-style and immerses you in the African way of living.