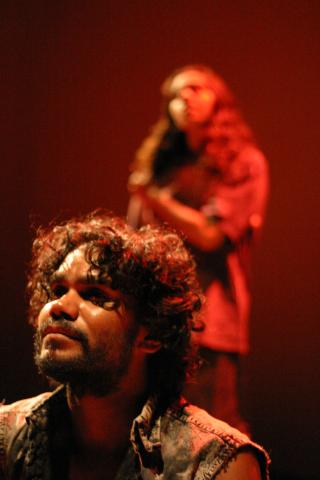 As was only to be expected from a work by Thomas Keneally, whose Booker-Prize winning novel was filmed by Spielberg as Schindler's List, BULLIE'S HOUSE is a piece of theatre that demands to be taken seriously. It more than merits such treatment, too, as it unfolds to under-informed audiences a fascinating yet doomed world of Aboriginal culture and beliefs.

The time is the 1950s - in the one jarring note, the costumes are no help in placing the period - and the instantly involving setting is an Aboriginal "mission", overseen by a young white paper-pusher from the Department of Native Affairs. An anthropologist prowls around with his camera; a priest grapples valiantly with conflicting religious systems.

Michael Walling's spare and forceful production shows this to be an oppressed yet tranquil existence. However, Bullie, one of the (rather young) tribal elders, is naively convinced that all could be perfect if only he displayed to the white men the sacred ranga, the ritual totems that hold the secrets of their universe. This is a monumental decision, and one whose scale we are perhaps ill placed to appreciate fully.

As well as the gripping forward thrust of the ranga-revelation narrative, Keneally subtly worries at a host of broader cultural issues. Should assimilation be the aim, or should a native way of life be kept strictly separate and therefore undeveloped? How can a government cope with such wildly diverse sets of values?

Tremendous performances from the four Aboriginal actors in the seven-strong cast ensure that these questions are never allowed to turn into a dry academic debate. The stand-out turn comes from Natasha Wanganeen, already much lauded for her role in the film Rabbit-Proof Fence, whose Doolie is far too opinionated for the liking of the fearsome Jimmie (Dennis Simmons). A powerful evening of all-too-rare theatrical stimulation. 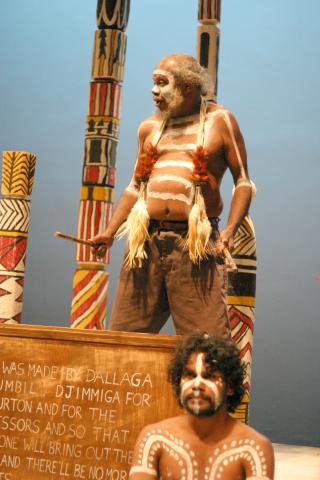 In Aboriginal culture, it's customary for women to woo men with supenatural love songs (and, less romantically, for cuckolded husbands to club their rivals to death). White Australian culture of the 1950s couldn't have differed more, and it's this monumental clash of lifestyles - still unresolved to this day - which powers Thomas Keneally's captivating new play.

Bullie is a young Aboriginal elder on a government reserve whose house was singled out for destruction by a renegade wind. His fellow elders insist it's the work of an angry god punishing him for cheating on his late wife. Bullie is inclined to believe the government official, who proffers a more scientific explanation. But he delays building his home, just in case. Heath Bergersen's determinedly open-minded Bullie experiences the moral dilemma at the heart of Keneally's drama - torn between two ways of life, he's always making the wrong decisions for the right reasons, the most catastophic of which being his unveiling of the sacred Aboriginal totems, a breathtaking gesture of unity which all but one of the white men fail to comprehend.

Keneally, a Booker Prize-winner, has created a compelling piece of political theatre. Without burdening his characters with worthy speeches, he tackles some burning issues of the day, not least: how do two polarised communities co-exist? It's a global question and one which this playwright answers with a bleak, heart-breaking conclusion.

But there's much dry humour here, too, and Michael Walling's production barely hits a dud note. Kevin Costello's langurous Aussie drawl stamps its mark on the well-meaning Professor and the four Aboriginal actors - two of whom appeared in the film Rabbit-Proof Fence - are superb, particularly Natasha Wanganeen as the sultry, hard-as-nails Doolie. A real eye-opener. 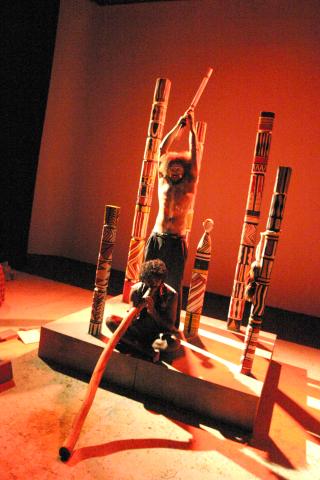 Booker Prize-winner Thomas Keneally took a true story and shaped it into a powerful tale of loss and dispossession for his 1980 play BULLIE'S HOUSE. Resurrected by theatre company Border Crossings, with Aboriginal actors taking the lead roles, it remains a powerful comment on the misunderstandings and wrongs committed when two cultures collide.

In the late 1950s, a group of Aboriginal clan elders erected a memorial that publicly displayed their ranga - sacred ceremonial objects previously kept hidden from women and the uninitiated.

From this idea, Keneally weaves his story of Bullie (an outstanding Heath Bergersen) and his clan, living on a mission where they are kept in line by an official from the Department Of Native Affairs, a young pen-pusher who regards them all as "no-hopers". But the missionary Rev. Burton (Tim Hudson) and a prowling anthropologist (Kevin Costello) are more aware of the significance of this display: in exchange, Bullie and his clan expect to be shown the white man's secrets, so they can live as equals. Sensitive direction from Michael Walling lets some excellent cast performances stand out: as well as Bullie, Rabbit Proof Fence actress Natasha Wanganeen is captivating as the mistreated Doolie. There may be no happy endings here but this is an important story well told.