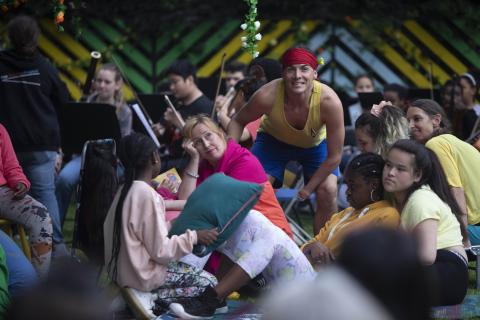 It’s evolved as the world has evolved.  Ten years ago, there weren’t that many people who were really interested in Indigenous cultures, and ORIGINS felt quite “niche”.  That’s really changed, partly because of the huge energy and creativity of the Indigenous artists themselves, and partly because people are becoming more and more aware of Indigenous culture as a hugely positive force in the world.  Humanity is finally waking up to the colossal fact of Climate Change, and we’re starting to see how lucky we are that the planet has these incredibly tough, resilient people who really understand the environment and how to live in a way that complements nature, rather than exploiting it.  Over ten years, the work we’ve done at ORIGINS has been a contributor to that change, and now it’s much more in the public consciousness, without having lost its radical edge.

It is, yes.  Back in 2009, we presented some great work, but it did feel as if we were having to explain things all the time.  We had a play from Canada called ALMIGHTY VOICE AND HIS WIFE, which was totally amazing – but the director, Michael Greyeyes, just felt that the audience wasn’t getting it.  “They need context, they need context”, he kept saying.  For the first two festivals, we ended up producing a complete 170-page book as the programme, just so people had enough background information to understand it all.

Nowadays, we’re finding ways for the audience to become much more engaged with the cultures on an ongoing basis.  So there’s a lot of education work, there are museum events, talks and film screenings in between festivals, and then in the festival itself we’re being able to programme more participatory work that involves the audience actively and directly.  Indigenous artists have become more interested in creating a dialogue with non-Indigenous audiences, and we’re excited to work with them to make that happen in London.  WESTWAY SOLSTICE was a really good example, of course.

Grupo Sotz’il’s piece OXLAJUJ B’AQYUN at Horniman’s Pleasance in 2015.  Totally unforgettable.  They’re a Mayan company from Guatemala, where the Indigenous people are dealing with the aftermath of a truly horrific civil war, when there was an attempted genocide against them.  One of the people who was murdered was Lisandro Guarcax, who founded the company.  On one level the show was about his journey into the world of the dead – and of course that stood for so many….   But it was also about the change in the Mayan calendar, the end of the persecution, the emergence of a new period in history when Indigenous people will be understood as the poets and the conscience of humanity.  They performed it outdoors on the Summer Solstice, here in North Kensington – and it did feel as if we were on the verge of the change we need to see in the world.  It really did.

INO MOXO at the Southbank was amazing: a stunning piece of visual theatre about the Amazon, with a wonderful young Ayahuasca shaman called Rawa at the heart of it.  Madeline Sayet’s WHERE WE BELONG: it was extraordinary to hear this Mohegan woman talking about the journeys of her ancestors to London, and the failure of the UK to understand how she viewed Shakespeare through an Indigenous lens, right there in the Globe Theatre!  NO WOMAN’S LAND at the Place: a very funny and provocative dance duet between a Spanish dancer and an Inuk knowledge-keeper.  And the Talks… I always love the Talks.  Indigenous people are so generous with their wisdom, so open to exchange, so energised.

It’s to avoid cultural appropriation.  You know, there are some people who say that a white man shouldn’t even be doing what I’m doing, that an Indigenous festival should be curated by an Indigenous person and that a play about (say) Africa should be directed by an African director.  And I can understand where they are coming from – after centuries of colonialism and oppression we really do need to hear these voices.  But I don’t think it’s going to help anybody if those voices are kept in a separate box, if we label them “diverse” or “multicultural” and so cut them off from any wider dialogue and engagement.  We can’t carry on into the third decade of the 21st century still saying that only Chinese people can talk about China, only Indigenous Australians can talk about Australia and so on – because that’s just perpetuating the divisions, and the problems we have are global problems, so we have to have really inclusive, global conversations through our arts and culture.  But that means I just cannot be a “director” in the old-fashioned sense of someone who has this pre-conceived vision of a show or a festival and who makes that happen with other people being pawns in the game.  I’ve got to spend most of the time listening to people who actually know, and seeing if I can help build some bridges.

I’m happy to say that a lot of people did see it - it was a free performance in the outdoor space at Maxilla Gardens by the Westway, so you could just wander in, and that was important to the feel of it.  It was something happening on the land, within the community - it wasn’t separated by a wall or professional status or the cost of a ticket.

We worked with a local youth orchestra - The Nucleo Project, who operate like El Sistema in Venezuela, engaging a huge range of young people in music.  As they started to play, the dancers arrived in the space, as if they were coming to a happy garden party.  They were all dressed in really bright colours, lots of yellow, and there was garden furniture, and flowers…   So on one level the whole thing was just a lot of fun, very celebratory, and you could absolutely take it that way.

But it had a darkness too - bubbling away all the time, just under the surface.   There was a section where the dancers had a water-pistol fight: and of course, on one level that’s quite silly and funny, but on another level it was about violence and it was about gangs and it was about what can be dangerous on our streets and in our public spaces.  There was a sequence where one of the dancers was lying on a table, and rose up, covered with a yellow blanket - so she was like a ghost that needed to be reconciled with her community.  From Maxilla Gardens, you can actually see Grenfell Tower.  It wasn’t that the piece was about the fire - it wasn’t.  But if you’re in that community, that close to the anniversary, you can’t just ignore it.  I think people understood that and responded very warmly to the oblique way in which Brian engaged - we had feedback forms that said “Justice for Grenfell”, enlisting the performance for the community.  So the joy of the dance was coloured by a sense of people taking ownership of the space.  It wasn’t an accident that the last piece of music in the show was STAND BY ME.

I think that’s where Brian’s genius as an artist, which is of course related to his Indigenous culture, was most apparent and most powerful.  I first met him in early 2018 in Australia, and we had a series of conversations about the approach he’s evolved to working with community casts and non-professional dancers.  One of the things he really stresses is the importance of de-colonising the body: by which he means getting rid of all the ways people expect you to move because of the built-up, unnatural, capitalist environment in which you have to operate.  Dance isn’t really something you have to be trained for - we all do it naturally.  It’s something that gets trained OUT of us - and Brian’s work is about enabling people to recover it.  In some of the early workshops in North Kensington, there was a little boy there, who was probably about three years old.  Brian kept saying “Look at him - what he’s doing with his body - that is so expressive and so natural.”

The other strand in what Brian does which is deeply Indigenous is to reconnect people to the space in which they live, and particularly the natural environment.  The land, the trees, the birds…    The water.  Did you know that there are underground rivers flowing under North Kensington?  One of them is called the Westbourne.  The space is like our instinct to dance - it’s been buried by centuries of focus on “growth” and “expansion” and “development” - but it’s still there underneath.  And it’s desperate to come out.

So it wasn’t really that people needed to be trained up or made like professionals.  It was more to do with leading them towards who they already are.  And they just embraced that.