Leading Ghanaian performer Adeline Ama Buabeng (Nana in THE DILEMMA OF A GHOST) discusses her career with Esi Sutherland-Addy. 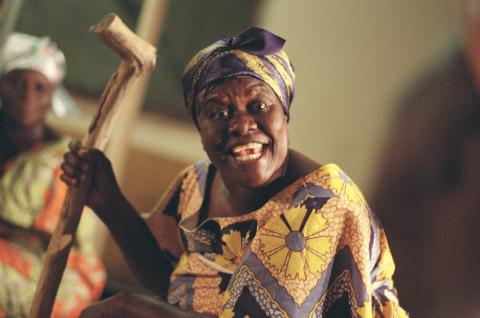 ESA: We are going to have a brief discussion, "na daakye asem nti", for the sake of future debates....

AAB: "Na yedi borode a yegya naha han", that when we eat plantain we reserve the skin.

ESA: I would like us to talk about your origins. How it was that you came to take up acting in the Concert Party tradition?

AAB: In the past Concert shows, magical shows and all kinds of performance were staged in my home in Mepom. So many Concert party groups used to come to our place. One day the Worker's Brigade Concert Party group came.

B.K.Afano and co. used to call me their wife - they told my mother "Maame, this child of yours is going to be a Concert Party actress. We see she has a gift within her." When I finished [middle] school, my mother did not allow it, so I ran away to become an actress.

At that time we used to do shows, but we did not have space at the Arts Centre so the leaders decided that they would go and ask for the use of the Ghana Drama Studio. At that time it was nestled among trees with a bungalow on stilts behind it. There was a large park in front of the studio where the Accra Great Olympics football club practised. So the leaders went to see Aunty Efua Sutherland and she agreed that they could come, particularly because a resident company could enliven the Studio. She explained that the Studio had been built for actors to work in so she had no objection.

I was a part-timer in the Brigade group from 1965 to 1966. I used to receive little tips at performances. Also when people got paid, someone would say, "take this and buy yourself some food". Whoever sent me, whatever their status, I would go willingly.

As a part-timer, I used to dance. It was the Brigade Drama Group that started including these dances in their shows. This was why there were many women in the Brigade group. The dancers heralded the show and then in certain scenes we also danced. In the past audiences preferred female impersonators to the women because they found it amazing that men had dressed as women. There was one called Rosina who entered a beauty contest and won during the Nkrumah regime. There were about four or five great ones who were difficult to distinguish from women when dressed. Their gait and everything was just like women.

So in my experience it was the Brigade Drama Group that first used women in their show. It was much later that audiences began to accept that women's participation in shows made them more natural, and eventually even began to prefer them to the lady impersonators. So the first group to use women was the Brigade group followed by Aunty Efua's Kusum Agoromba. After this, when we used lady impersonators, we deliberately used them in selected scenes as appropriate.

ESA: Now you say you were in the Brigade Concert Party when Aunty Efua saw you and said she liked you. Tell me how this came about.

AAB: When she saw me she told Kwamena Ampah that she could see that "this child had something in her" and that she liked her. We did a show and I danced on stage.... I did the kurunku dance. She didn't say anything to me right then. So one day I was called by Kwamena Ampah and told that Aunty wanted to work with me and would I be willing to leave the Brigade Group?

At that time I was still a part-time worker. I said I would go and inform the elders of my family. So I went and told my elders and they said OK, if I thought the lady could handle me [with care], their concern was that I should be working. After that I did not worry about it any longer. So one day she called me and said we would go to my hometown. She took along drinks: one carton of beer, one crate of soft drinks, schnapps, whisky... about six different kinds of imported liquor. When we got there my grand uncle was lying in an easy chair and I told him that a certain lady was looking for him. My mother had gone to the farm. The guests were seated in my own father's room.

So Aunty Efua told them that having been with me for some time, she wanted to take me as her child but wanted to come and officially inform my relatives because of the future reprecussions of her actions. They responded: "All right, if the child herself likes you, we have nothinbg to say because whatever surface you apply a solution of red clay, it will have a red sheen." My grand uncle then poured libation. And this is how I came to remain in Auntie's hands and how you have all cared for me to this day.

ESA: Well speaking of homes and backgrounds, would you not agree that with a family background like yours questions must indeed be asked? After all there is a stool [symbol of traditional political office] on both your mother's and your father's side. As reagrds the royal blood in your family: what sorts of problems did your mother have because of your career?

AAB: What the family said was that I was polluting the stools because Concert or popular drama was the work of prostitutes, that is "those-who-move-about-in-order-to-eat". I had no idea that my mother had this problem. It is just that every now and then she would make a negative comment. Everyone spoke against it. So every year my mother was obliged to make an offering of one bottle of schnapps to the elders of the clan. When she dies in 1974, my uncle came to me and told me that they could no longer continue to pay the propitiation drink and that I should find a proper job and that that I should stop this "concert-cencert" which is of no value. What I said to him was that I had had a child and that I couldn't depend on him to look after my child and myself so he should look for another job for me and I would also endeavour to do the same. Nothing more was done or said.

ESA: Now it is true that Kusum did not only do Concert Party. You also did scripted plays. Given the differences in the two genres and the fact that some of you were not literate, how did you manage?

AAB: Those who were not literate were grouped with those who had received some education. None of us had gone very far with our schooling. We were broken into about six groups. Usually those parts that went together in the play formed a group. The literate one would say his / her lines and teach the non-literate ones theirs. Because the plays were in our own language, the non-literate actors picked up the dialogue easily. If there was a scene with some English in it we could teach those who had never stepped in a classroom and could not read "a" to say those lines without the audience being any the wiser.

ESA: Tell me about your research processes.

AAB: Sometimes we just go and sit somewhere. Like when we are putting a play together. Auntie Efua could just give us money and ask us to go to town and study a prostitute or a lunatic. Then you would go and observe long and hard. Indeed we learn a lot of things from lunatics. Even with a sigh for example, a lunatic's sigh could be quite natural and better than you might have devised. So now if somebody is doing something in town, I cannot pass by without watching it closely. That is why people always say I am a good actress because what people see and ignore, I see and treasure. I use it to enhance my work. it is also because of this tendency that I find it easy to teach novices. When I go to funerals, weddings, arbitrations, or when I am present during a quarrel between husband and wife, siblings or child and parent. Or sick people at the hospital: the different facial expressions that go with various ailments and pain. Sometimes when I am walking with you, I look at your mannerisms without you knowing. I will say nothing unless asked, but I would have picked everything. Also in the market. Pepper sellers, tomato sellers, cloth sellers: all of them.

ESA: So these are real memories which make you portray pathos so convincingly.

AAB: Yes. In a moment I can be in tears. So I lecture trainees that when something happens in their homes which is painful, they should hold on to the poignancy of the moment inside them. So as soon as they remember, the tears will flow.

ESA: Now there are some things that you know you do well and are able to move your audience profoundly. What are some of these things?

AAB: Some of these things are: my choice of language because I use proverbial language. We Africans need proverbs. We love them. Secondly, when I do the show, I act very realistically, and am able to evoke the scene and make it immediate. Sometimes, I depict exactly what is going on in someone's home. For example when I weep, people tell me they forget competely that they are watching a play. They feel that they are involved in something tat is happening in a real-life setting. This is what the people like about me. Also I sing well.

Adeline Ama Buabeng has been a performer in Ghana for over forty years. Her landmark roles include Anansewa in Efua Sutherland's The Marriage of Anansewa, Dansoaa in Wo Hyee Me Bo, and the title role in Yaa Konadu [Efua Sutherland's adaptation of Chekov's The Proposal]. She also works in the non-scripted Concert Party tradition of popular theatre.

Esi Sutherland-Addy is a Research Fellow at the Institute of African Studies at the University of Ghana. From 1986-93 she was Deputy Minister in charge of Higher Education. A fuller version of this interview appeared in Jane Plastow (ed): African Theatre - Women (Oxford, James Currey 2002). We are grateful to the editor and publisher for their permission to publish the material here.